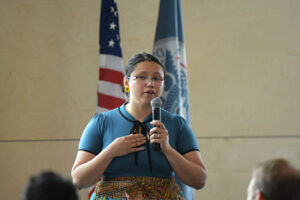 Every year, the Daughters of the American Revolution (DAR) awards the Americanism Medal to a naturalized citizen who has demonstrated an outstanding integrity, trustworthiness, and patriotism.

This year, DCL Adult Literacy Program volunteer Virginia Cox has earned this award. Virginia began volunteering with Douglas County Libraries as an organizer for the first DCL Human Library ™ event in 2018. She then began facilitating the Practice Your English conversation groups and has also worked as a one to one tutor for English learners. Her experience as a naturalized citizen allows her to empathize with and encourage the adult English learners in the program. In 2019, Ms. Cox also welcomed new citizens as they took their oath of allegiance at Douglas County Libraries in Parker.

In addition to volunteering for the Adult Literacy Program with DCL, Ms. Cox also demonstrates her integrity and commitment to her community by volunteering with Schweiger Ranch, an organization that provides diverse recreational and educational opportunities to foster understanding and enjoyment of the area’s natural and cultural heritage, and Best Buddies which encourages friendships and leadership development for individuals with intellectual and developmental disabilities.  Virginia Cox shows her patriotism through her actions in helping others rise up and achieving their own American dreams.

Her parents immigrated as refugees during the civil war in El Salvador, while she stayed with her grandparents until her parents were able to bring her safely to the United States. Virginia learned English after coming to the US and became naturalized in 2008.

Ms. Cox once said that she chose to move to Douglas County because she saw the library as a measure of the quality of the community. Ms. Cox’s contributions as a volunteer have made Douglas County Libraries even stronger.

The Grinch is a Success!